Royal Game of Ur

Royal Game of Ur for Tabletop Playground

How are ratings calculated?

Ratings are calculated using Evan Miller's method (based on a Wilson score confidence interval) that is self-correcting. This means that the % of positive ratings & number of ratings decide a mods position on the top charts. The benefit of this approach is a mod with 2 positive ratings will not outrank one with 10 positive ratings but 2 negative. Nor will a mod with tons of rankings outrank everything unless most of the ratings are positive.

The rules of the Game of Ur as it was played in the second century BC have been preserved on a Babylonian clay tablet now in the British Museum. Based on this tablet and the shape of the gameboard, British Museum curator Irving Finkel reconstructed the basic rules of how the game might have been played. A Russian game re-constructor Dmitriy Skiryuk developed his own version of rules, where checkers take actions depending on the square they land. Any version of rules can be played with this game set. The rules developed Dmitriy Skiryuk are outlined in the next page.

Movements are determined by rolling a 4 four-sided, tetrahedron-shaped dice. Two of the four corners of each die are marked and the other two are not, giving each die an equal chance of landing with a marked or unmarked corner facing up. The number of marked ends facing upwards indicates how many spaces a player may move during that turn.

Checkers have a plain (blank) side and a 5-dot side. They start plain side up and are flipped over halfway round the board (see next page for details), “Combat” happens in the eight squares in the middle of the board. When your checker lands on one of these squares occupied by one of your opponent's checkers then, depending on the type of square, your opponent’s checker is trapped (until your checker moves from the square) or “knocked out” (i.e sent back off the board so that it must restart the course from the beginning) but plain checkers can only be knocked out by plain checkers and 5-dot checker by 5-dot checkers.

When a player rolls a number using the dice, they may choose to move any of their checker on the board or add a new checker to the board if they still have pieces that have not entered the game. A player is not required to capture a checker every time they have the opportunity, but players are required to move a checker whenever possible, even if it results in an unfavourable outcome.

In order to move a checker of the board, a player must roll exactly the number of spaces remaining until the end of the course plus one. If the player rolls a number higher than this number they may not move the piece of the board.

Direction of movement: Checkers start as “plain” and follow the yellow path. They get flipped over to the 5-dot side when they pass the point indicated below and follow the red path.
Dice: Count the number of marked tips uppermost on the 3 dice, but note that 0 counts as 4 (i.e. possible dice values are 1, 2 3 or 4) 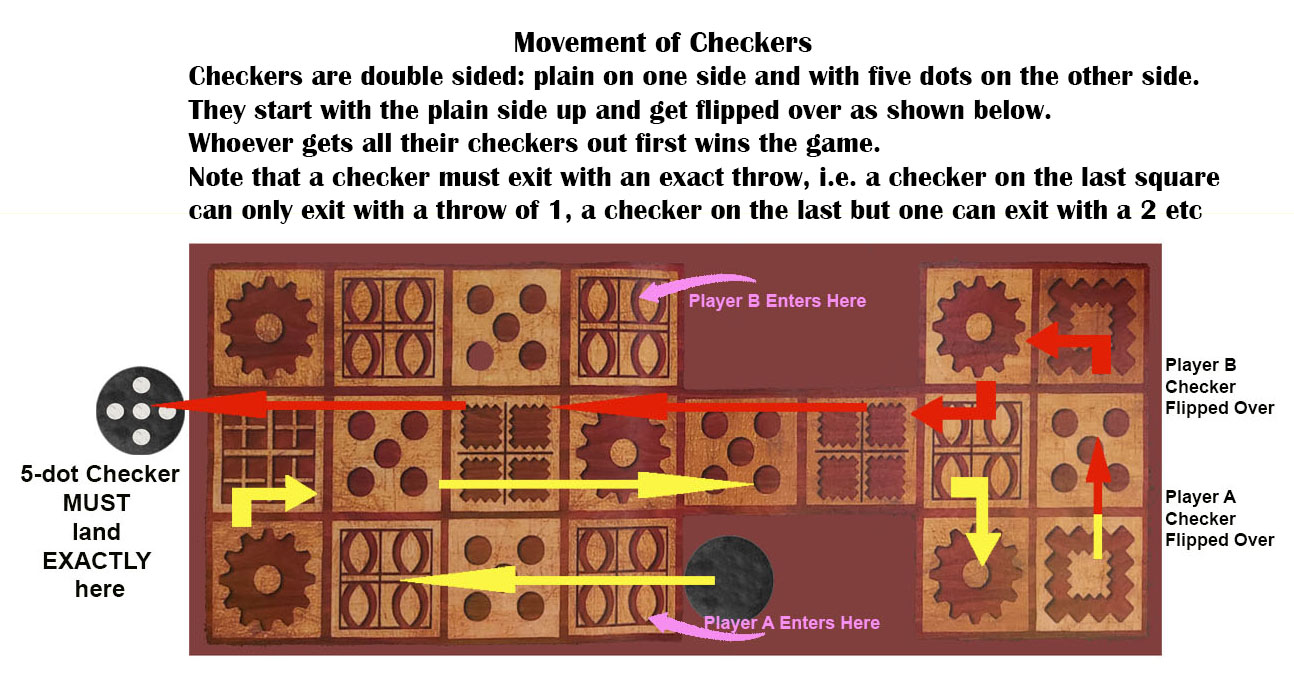 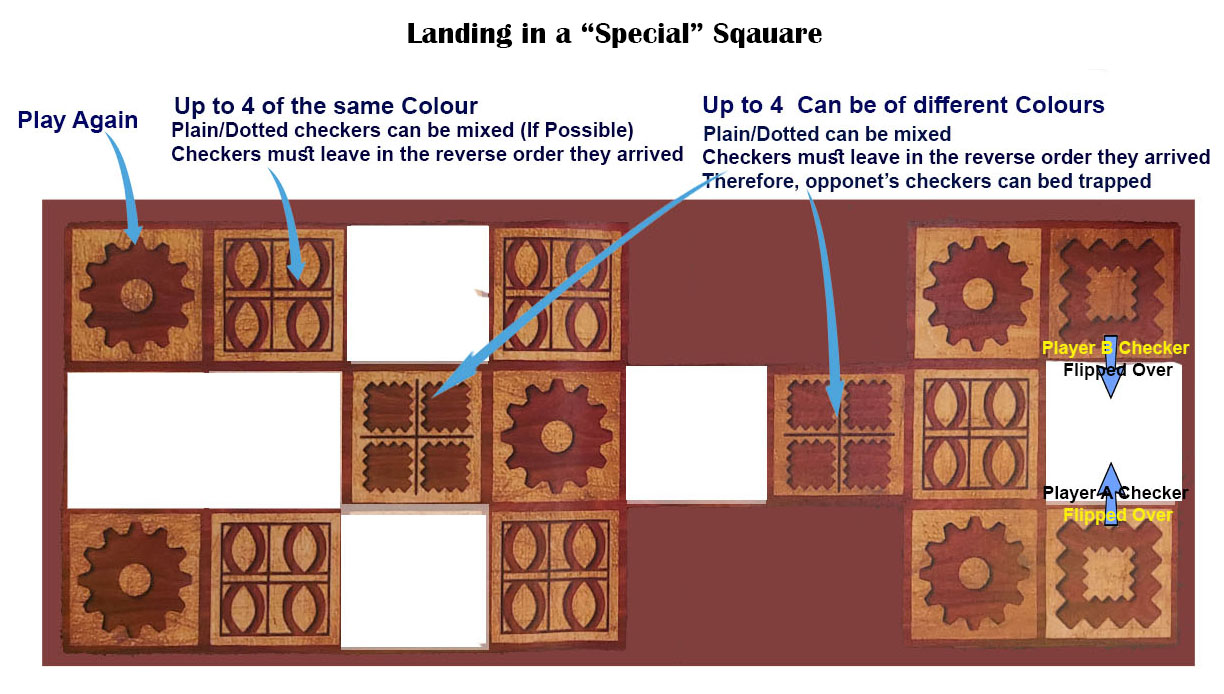 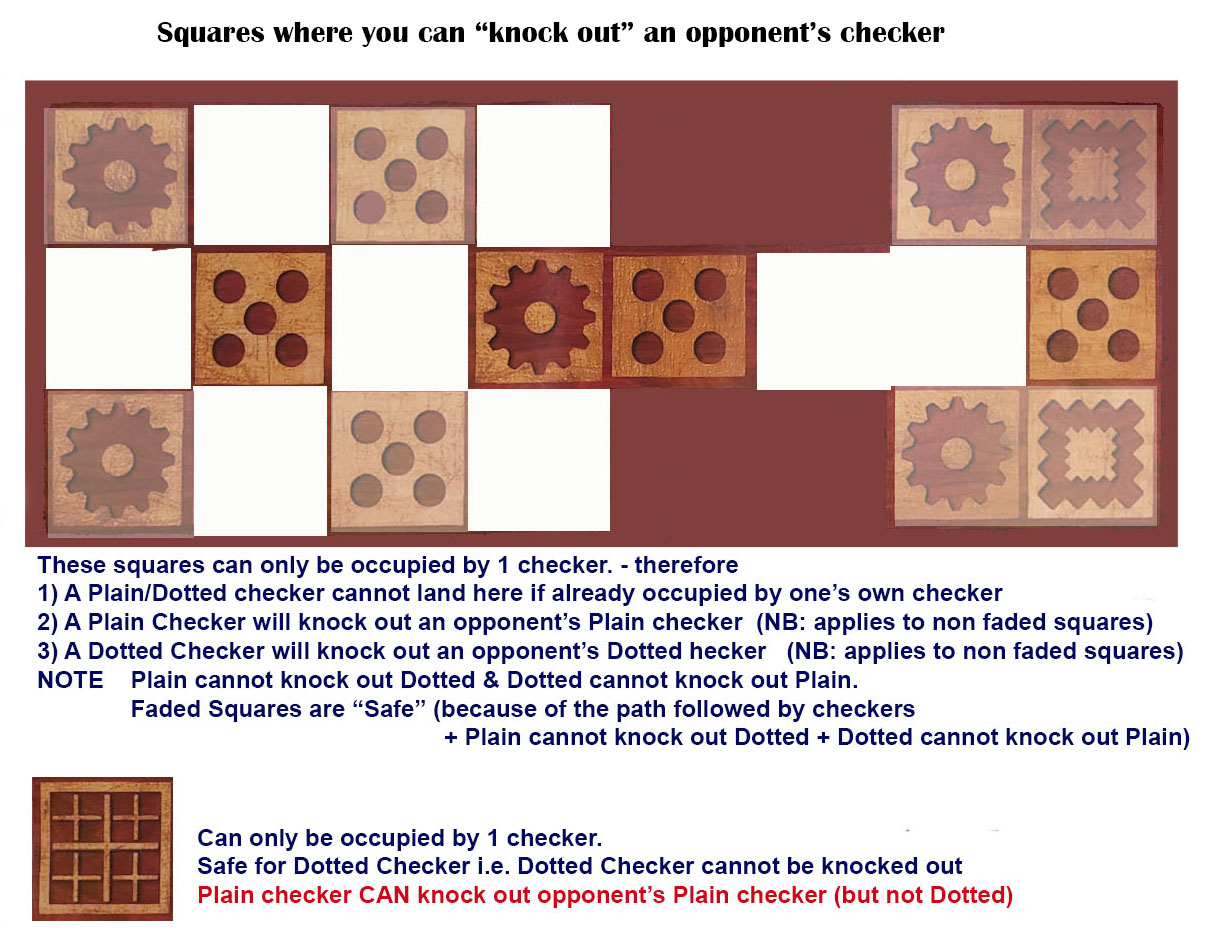 No packages were found matching the criteria specified. We suggest you try the package list with no filter applied, to browse all available. Join now to share your own content, we welcome creators and consumers alike and look forward to your comments.

No comment were found matching the criteria specified. We suggest you try the comment list with no filter applied, to browse all available. Join now to participate.